We started by completing half of the Golden Circle on our first day. Driving from the GoCamper office in Reykjavik to Thingvellir National Park which was the meeting site of Iceland’s Viking democracy as well as a film site for numerous scenes in Game of Thrones. (You decide which of those facts excites you more). We did a short hike up to a waterfall surrounded by snow capped boulders, watched divers dive the Europe – North American tectonic plate divide, and admired the crystal clear turquoise waters of the river. 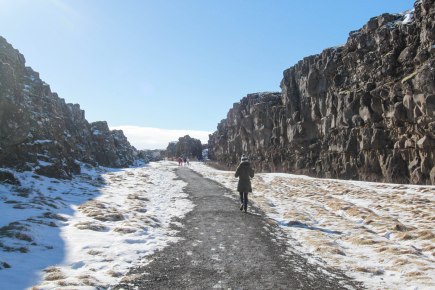 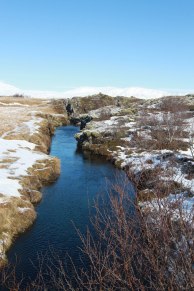 Next stop was Geysir where clouds of sulfur steam warmed us. Pools of beyond boiling water are surrounded by fresh snowfall.

Gullfoss was absolutely breathtaking. Hundreds of waterfalls cascade hundreds of feet into a deep valley. The spray from the waterfalls froze our faces, but we couldn’t stop admiring this amazing spot.

Hrunamannahreppur was sort of a spontaneous turn off of the main road for us, but we were completely alone watching the sun begin to set over this spot where two rivers meet.

We ended the day at Hamragardar campsite which has the best views of Seljandsfoss waterfall, cozy staff, and a resident orange tom cat who greets everyone with a gruff meow. We parked the camper van, cooked some hot dogs, settled in for the night and watched the nearby waterfall which was lit up at night. This was our favorite campsite of the trip! 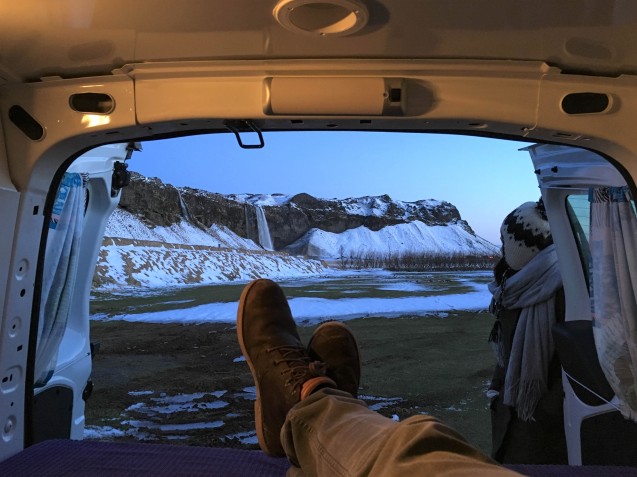