Halloween has always been my favorite holiday. As a child I would await the day when the local fabric store would be decorated with leaves, skeletons, and jack-o-lanterns. This meant that Halloween Costume patterns were in. My mom would go take me to pick out the costume I wanted for her to sew for me. I would pour over the volumes for hours…McCalls, Simplicity, Butterick… to find the perfect trick-or -treating outfit. We would flip through the numbers to find my selected pattern in the right size, and then pick out the fabrics. In a month, I would have my very own Halloween Costume.

Tradition and anticipation are inextricably tied to my memories of Halloween: picking out my perfect costume, co-designing it, waiting impatiently for a month, begging to carve pumpkins days before the big night, and then finally letting loose in the neighborhood – collecting candy and visiting the local haunted house productions. When I got older, I made my own costumes, and went to at least 3 nights of Halloween parties.

I was bummed that this year I was going to miss out on the festivities that have always had a special place in my heart. However, this was not the case. 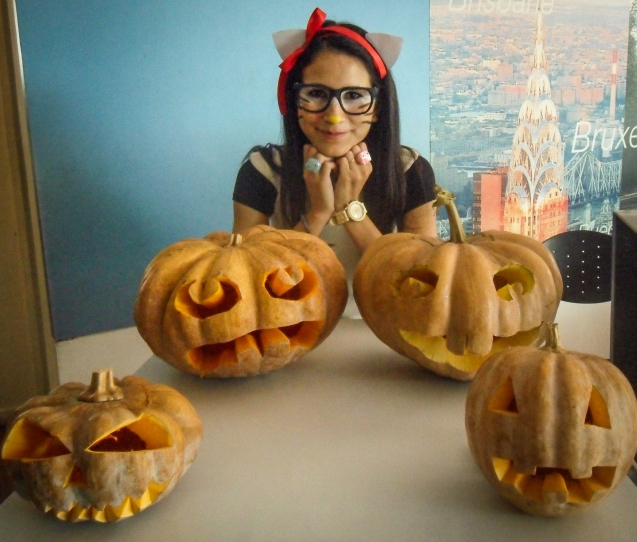 In Indonesia people don’t usually celebrate Halloween; however, an unexpected last-minute announcement appeared on the teacher’s room whiteboard last week, “Thursday is Halloween. All staff and teachers should wear a costume or paint their faces in celebration.” Excitement surged through my veins! I was after all going to celebrate Halloween. On Wednesday, little black bats were being carved out of styrofoam by the incredibly talented office boys who make decorations with incredible exactitude for each and every event the school hosts. You want a colony of identical bats by tomorrow? No problem! Throw in a meter tall a creepy tree cutout for the window and 4 jack-o-lanterns. Give those boys a knife and some paint: they know how to decorate for a party like Martha Stewart. 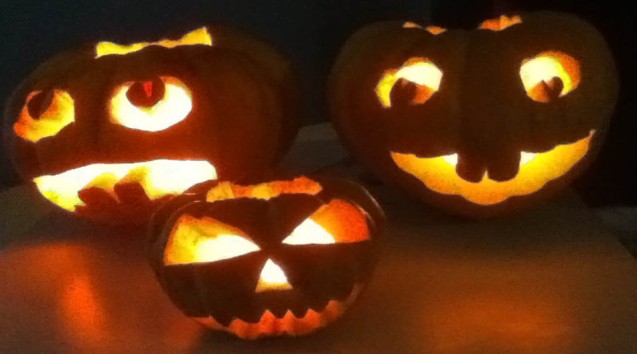 Thursday came and our witching hour started at 3:00 p.m. when the first classes (mostly children) started. Some showed up in costume and were super adorable getting into the Halloween spirit. There was mask-making in the courtyard, and afterwards trick-or-treating in the lobby. The pumpkins were lit and the lights dimmed as the staff passed out candy to the eager children.

My class of 5-6 year olds lined up and followed me into the lobby to trick-or-treat. They were definitely confused when suddenly we took a turn from learning the colors and sounds of the animals to an impromptu lesson of the trick-or-treat song. No idea what smelling anyone’s feet had to do with ghosts, costumes or candy, but they accepted the tradition nonetheless. 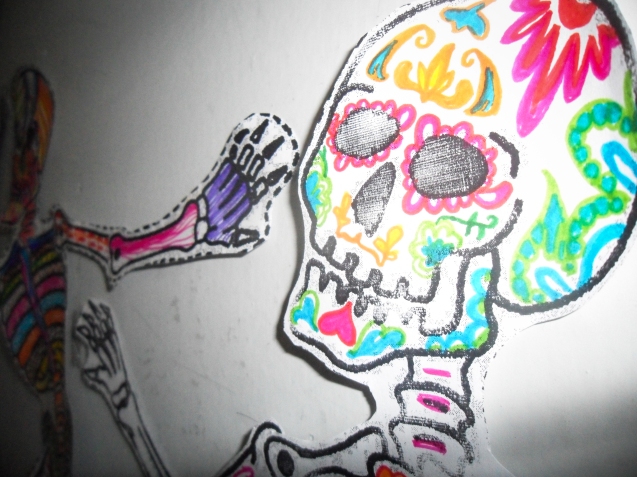 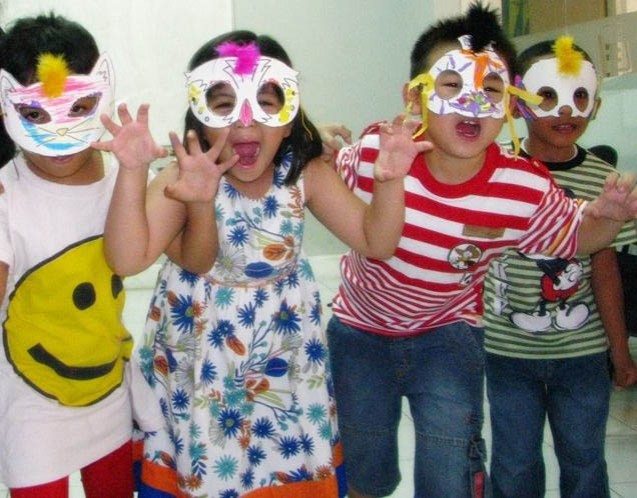 Candy in their bags, the students, and I were ready to go back to the classroom when we were caught by surprise. There was one more place to trick or treat: the office of the Director of Studies. We lined up once again and headed into the corner office. Inside there were four Indonesian ghosts. As a side note. Indonesian ghosts are very well known cultural beings like vampires or werewolves are to Americans. There are movies made about them and everyone knows who is who. The only difference between the western legendary haunts or monsters is that Indonesian ghosts typically show up in the news – blamed for car accidents and such. In Indonesia, there are certain famous ghosts; Pocong for example is a ghost who is wrapped and bound in funeral garb, hopping around because due to bound legs. Another is Sundel Bolong: a woman whose back has been eaten by maggots, now some say her back is filled with snakes. Her hair is long and she wears a long dress and perches hunched over in trees. Both Pocong and Sundel Bolong showed up to our Halloween Celebration, much to the dismay of my children. 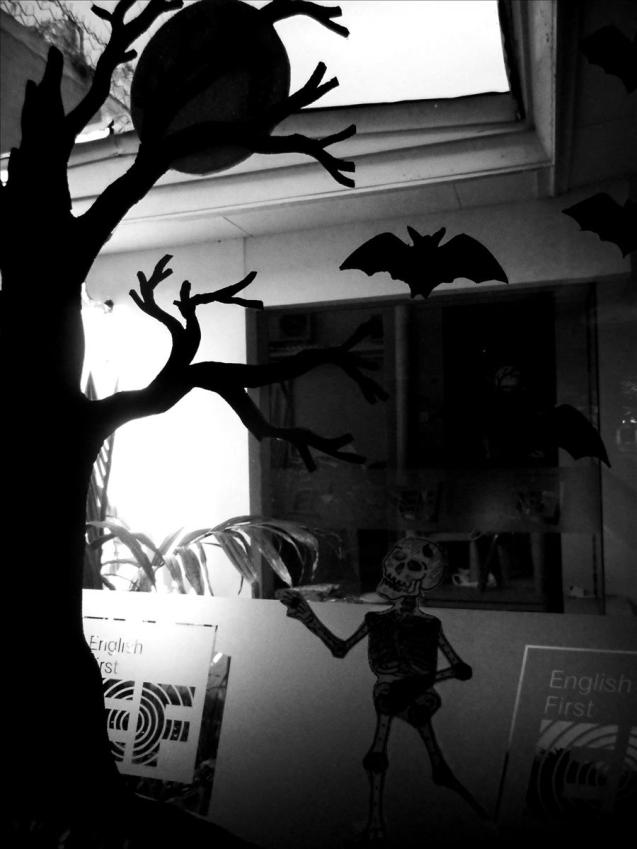 We entered the office and to the children’s horror three ghosts were demanding in low tones with blank faces that they sing the trick or treat song that they definitely didn’t learn in their 2 minute lesson. However, the ghosts were unrelenting. No one was leaving the small office without singing the song. Besides, Pocong waited just outside the door. Eyes wide with terror and paralyzed with fear, seven small children flattened their tiny bodies to the wall and made whimpers as trick-or-treat song lessons commenced. After about 5 extremely awkward minutes and some pretty pathetic attempts, the candy was awarded to my students. We now faced another problem, getting them out. Terror had seized them, and although they were currently in a room with three ghosts, the ones outside terrified them even more. I now know how a mother hen feels because in a matter of seconds I had seven children clinging to me hoping that I could protect them from the hopping horror outside the door. We made our way slowly out and they all broke into a sprint to get back to the classroom screaming and exclaiming “AKU TAKUT!” (I’m scared). My ribs ached from laughing so hard. 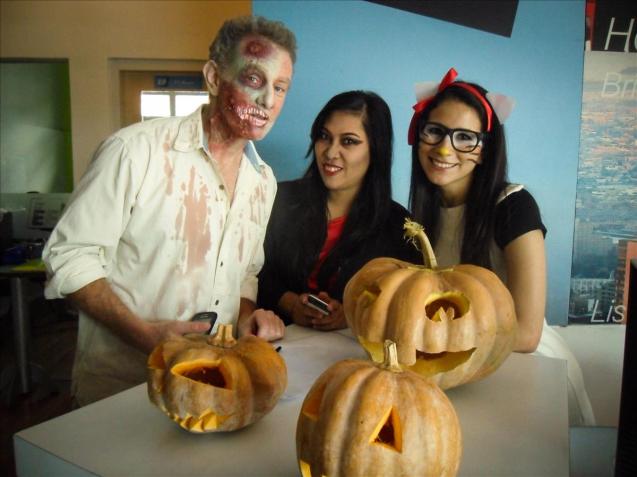 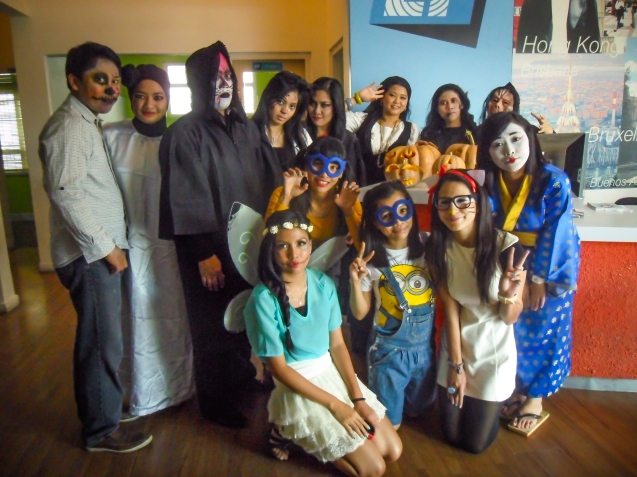 Although Halloween is my favorite holiday, I can’t remember my first. Dressed up as a baby pumpkin, I’m sure I greeted trick-or-treaters at the door tucked under the arm of my mom or dad. My students however, will never forget their first Halloween, and are in fact probably still having nightmares about that corner office. The magic of Halloween, the wonderful excitement that comes mixed up with terror as you run screaming and giggling with friends. The glow of candles inside jack-o-lanterns casting flickering shadows mark the day. It was such a hilarious and fun experience to bring Halloween to Indonesia and give some of my students their first Halloween scare. Quite possibly the best day of work ever. 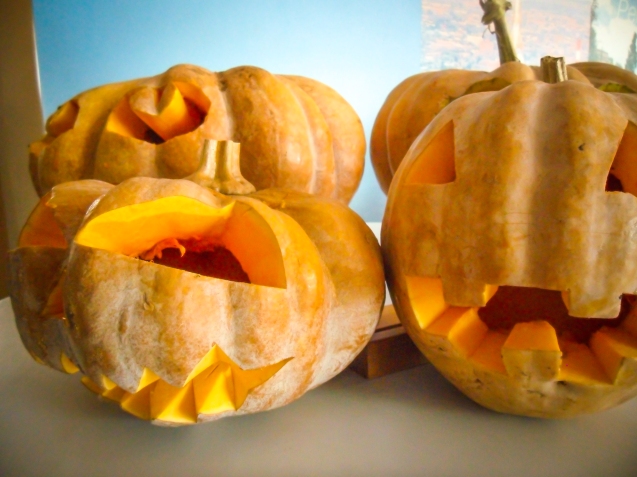 One thought on “Halloween in Indonesia”