Bangkok being the historical capital of Thailand holds some of its most amazing temples and monuments.  Although getting to them may be a process for the unsuspecting good hearted tourist.

Early morning found me pouring over a photocopied map with the hotel concierge as he circled various temples in bright blue pen drawing lines indicating the best routes, carefully adding bridges over grey streaks of waterways, and scribbling out stars to define the land mark 7-11’s that would line our path of pilgrimage. I had 3 destinations: The Grand Palace, Wat Pho (Temple of the Reclining Buddha), and Wat Arun.  I relinquished the map to Shane for two reasons: he admittedly has a better sense of direction than me, and if we are to get lost, I am completely Clorox white innocent of any folly and hereby not responsible for any last resort expensive taxi ride back, and no complaints will be issued. (Ladies traveling with your boyfriends take note, this is a beautiful thing)

Shane and I were on our way at 9 a.m. Me, in my carefully chosen temple appropriate clothing: the one pair of pants and sleeved shirt that I brought on the trip specifically for this purpose. We follow our bright blue line arrive at the tell-tale 7-11 cross a bridge of brown water with miscellaneous floating debris that gets my imagination going to its dark places. We pass some government buildings with 10 foot tall gilded framed portraits of an important looking man in various poses: he can do serious, he can do friendly and my personal favorite is of him holding a baby that all body language indicated was not his own.

A block away from the Grand Palace we are approached by a friendly man with an umbrella who strikes up a chat and tells us that the Grand Palace is currently in a state of ceremony and is not open until later. But, today there is a special free gas promotion for the government run taxi. They are the ones with the yellow license plates. 20 baht (65 cents) will get us an hour and he pulls a convenient pen out of his pocket to mark some new temples on our map for us to go to throwing in some fashion district shops on the way that he thinks we may be interested. He is so kind of us as to flag down a taxi and we happily get inside. First we go to the temple of the sitting Buddha, in an ornately decorated room is a historically significant Buddha that found his way back home despite various war removals and attempts to deface him. Visitors must take photos of the Buddha and print wallet sizes to have with them always for good luck after ringing a huge gong and producing a deep resonating sound throughout the temple no less than a total of 3 times.

We are given an impromptu education of all this by a lingering well-spoken Thai man who also happens to mention the great tailor made suits and dresses of the fashion district that we ought to visit after this because they will secure the free gas coupon for our driver. I bet it’s not hard at this point to predict the next stop or rather delay on our way to the highly recommended Wat Benchamabophit Dusitvanaram (Marble Temple) made particularly famous by its image on the 5 baht coin.

We sat in a tailor shop awkwardly feigning interest to an overly eager salesman as we silently counted the appropriate number of minutes until we could make excuses and be on our merry sight-seeing way that would ensure free gas for our dear sweet taxi driver. Having a useless Discover Miles Card that actually doesn’t work almost anywhere makes a fantastic excuse and we jauntily leave the shop ready to get our temple sighting on.

I am not quite sure how it happened but next we were in a gemstone factory passively gazing at sparkles of a spectrum of colors glittering in a really unappealing fashion. Perhaps the looks on our faces or our state of apparel suggested that we be ushered out of the showroom and into the gift shop to look at sarongs and carved Buddha and elephant figurines. We took this as a convenient compliment and showed ourselves to the door. 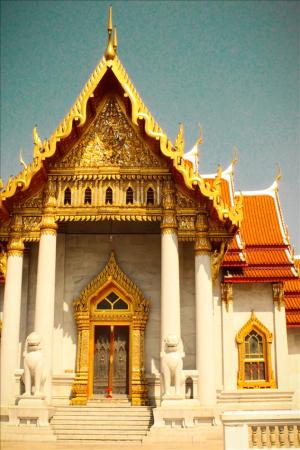 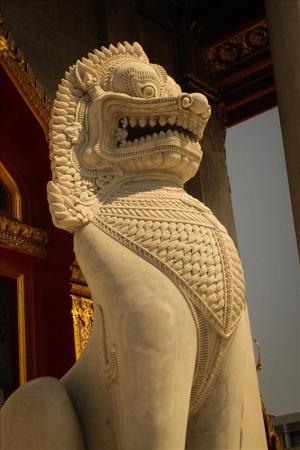 The Marble Temple stood in splendor with its pristine white Italian marble façade. Two monks in orange strolled by as we walked to the masterpieces carvings that were doors in a glittering mosaic golden archway. It shone brighter than its minted image on the 5 baht I had in my pocket.

After beholding the beauty of the Marble temple, we were primed and ready to see the Grand Palace, the enormous campus of prayer.

But first we had to go to one more tailor shop for a minimum of 10 minutes. Then hopefully we would complete the tourist trap course that we were on and be free from the requirements of tourism so dictated to us through this elaborate scheme.

We found ourselves being referred to as “my friend” by a short man with bloodshot eyes who kept inquiring of Shane: “Do you need a shirt, my friend?” as we flicked passively through a look book of businesspeople doing business thing with briefcases on the bright sunny sidewalks of corporatopia. I excused myself to the restroom. When I came back Shane was fingering the many striped fabrics on the wall and asking dry questions of their origin while clearly not listening to the answers.  Time to go. He asks if we can take a card, “…..But DO you NEED a shirt today my friend?”

“Uh, I was more of just looking”

“This is not a looking kind of place, it is a business place”

“Okay” I say tersely and usher Shane out before he starts making apologies to this aggressive salesman that will echo off the walls of his empty shop.

We get back in our taxi and are taken to the Disneyland of temples with pristine grounds and walkways and quaint French style shops. Preparing to make our ever awaited entrance, we are once again stopped by a pair of men insisting the temple is closed and we could not enter: one generously offering to get us on a tour to alternate places in the meantime. We just stare silently to the point where we are asked if we speak English, one man steps away from the sign just long enough for me to read “THAI ONLY THIS ENTRY FOREIGNERS USE NEXT ENTRANCE HOURS: 8 a.m…..” Yeah. Right. Closed. I am vaguely reminded of reading at some point that the best lies are the most elaborate ones. We did score 2 bonus temples to our itinerary out of this intricately spun web of a tourist trap, and managed to resist the temptation of fine fabrics and glittering gemstones. 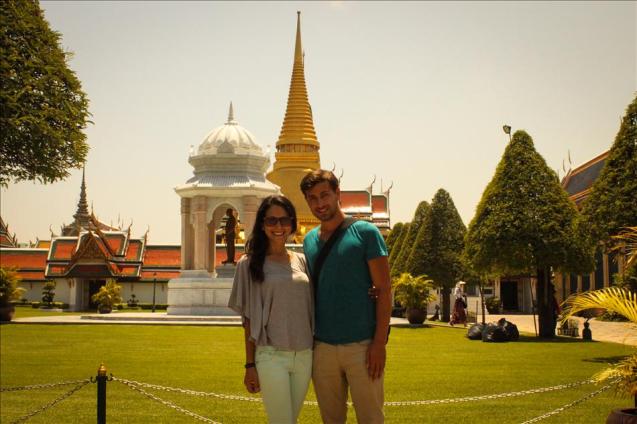 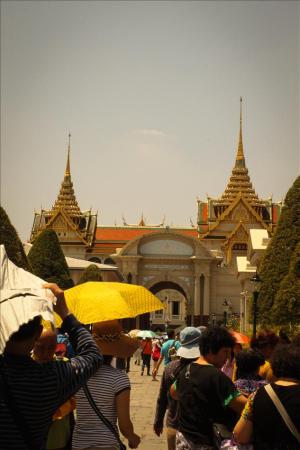 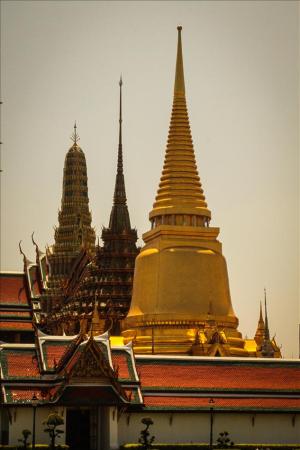 We tour the temple grounds and admire the architecture while surrounded on all sides by people in a way that completes the nostalgia of Disneyland’s New Orleans Town Square snap a mandatory couple shot and make our way onward to the temple of the reclining Buddha passing a family stopped at the alternate entrance intently studying a map with a helpful looking Thai speaking perfect English. I breathe a sigh of relief when someone else taps the family on the shoulder and they fall away, glad that I wasn’t obligated to rescue them and a sense of selfish resentment at my obligation to surrender advice of avoidance of the calculated scheme we had been taken unexpectedly by. Apparently peaceful passé zen wasn’t rubbing off on me from the dozens of Buddahs I had seen thus far. 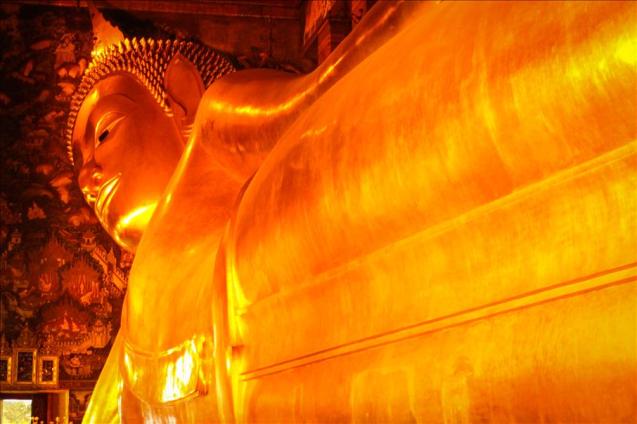 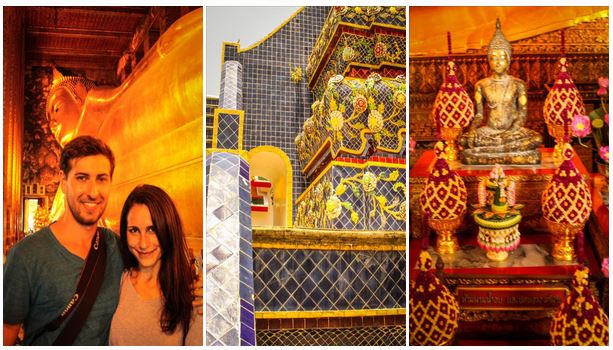 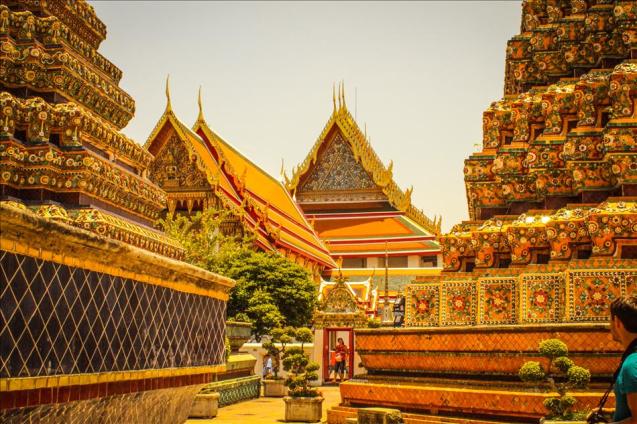 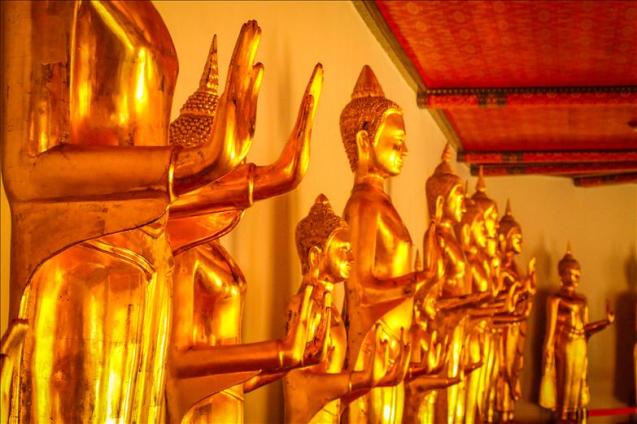 Wat Pho was amazing with the spectacle of the giant reclining Buddha with not a care in the world bathing a huge pillared room in gold light and being utterly impossible to capture completely in one’s range of vision. Frescoes decorated the walls delicately gilded with fine brush strokes depicting beautiful scenes. Outside the grounds were lavish with mosaic pinnacles and golden statues lining the walls as receptacles for incense, and rings of flowers. We wandered about taking in the colors, and snapping photos in opes of capturing a fraction of the the visual impressiveness of the place before we shuffled out to meet our next destination. 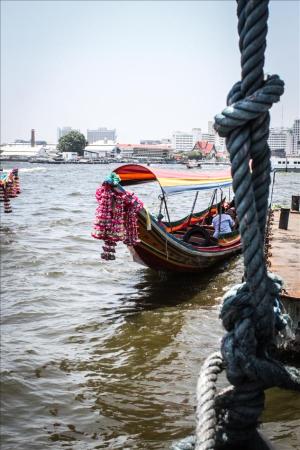 Wat Arun was across a larger part of afore mentioned brown river. Imagining the aftereffects of accidentally falling in consumed the7 minute long ride recalling the mechanisms by which antibiotics function from Biology class. The temple itself was probably my favorite of the day. It was mosaicked in teals and corals which are so in right now, and had several areas with beautiful things to see surrounding one colossal pinnacle of mosaic and stone carving. The best part was the near vertical steps leading to the top. In the 90 degree heat Shane leaned over to me, “We don’t have to do it if you don’t want to” It’s not even a matter of want to at this point. I must get to the top. I must finish my twisted temple tour with this feat despite the sweat collecting in my belly button amongst other places. The top was wrapped in its full diameter with silk for climbers to sign, but wouldn’t you know, a pen was nowhere to be found, not to mark a map or otherwise. And that was a beautiful thing in itself.

2 thoughts on “Temple Tour of Bangkok”